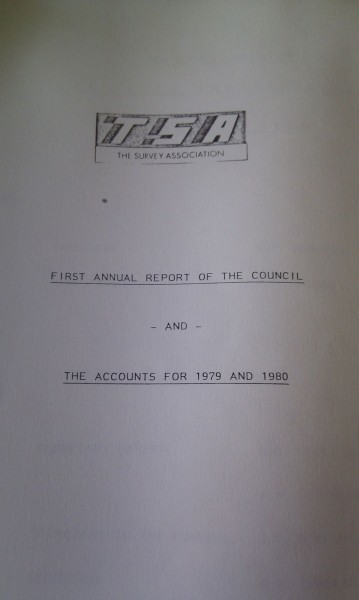 When TSA’s Secretariat moved to Newark in 2006, a file opened up by Bill Johnston in 1979 came to light. This charted the formation of TSA and it was felt that a brief story about this would be interesting for all members. What follows has been compiled from the TSA records and the personal diaries of Martyn Iffland to whom a big thank you is extended.

In 1973, Bill Johnston who was then the Managing Director of Engineering Surveys in Surrey contacted a number of leading members of the surveying profession in the United Kingdom to determine if there was sufficient interest and support for the formation of an “Association of Land Surveyors.” It was felt at that time that the industry lacked direction and purpose, whilst also being relatively unknown outside its own corridors. The Government was blissfully unaware, perhaps as now, of the role of the surveyor and it was agreed that this could best be changed by the formation of a body to represent all facets of the industry.

Numerous phone calls took place over the next few months and the first recorded meeting of the embryonic organisation took place at St. Stephen’s Club in Westminster London on the 3rd January 1974. The leading lights at that time were Bill himself, Stan Longdin, Ron Craven, Derek Simmons, John Webb and Martyn Iffland. I apologise now if I have left anyone off this list. The aim of this meeting was to discuss the principles of the ASL, a name not yet agreed upon, and to discuss the way forward. Over the next sixteen months a number of smaller meetings took place between interested parties to gauge interest from the industry in general. The next meeting of the ALS took place again at St Stephen’s Club on the 5th June 1975. It is not clear at this point if the club was a particularly suitable venue, but Stan Longdin was a member so it made sense to take advantage of this.

St Stephens took its name from St. Stephen’s Chapel, the original meeting place of the Commons. The Club was originally connected with Conservative Members of Parliament and civil engineers. Counting Benjamin Disraeli amongst the founding fathers, the Club was reopened at 34 Queen Anne’s Gate by Harold Macmillan in 1960. Historically the Chairman of the Conservative Party was the Club President.

There are no recorded minutes remaining of the June meeting although Martyn recalls that everybody present had a different view of the direction the ALS should take, and many hours were wasted discussing the future name of the association. Perhaps in anticipation of a very tortuous day, one of the delegates who will remain anonymous came armed with a carrier bag containing a bottle of something from which he commenced to drink. The meeting in 1975 apparently ended with no resolutions having been passed and resulted in a rather dispirited Bill Johnston. He did however indicate that he would try to get the idea going again sometime in the future.

Although some of the keener members continued to talk and plan ahead, there is little evidence of anything else happening until July 1977, due to a combination of interested parties being too busy or just general apathy. Nothing changes really!

Two meetings were held in 1977 once again at St Stephens Club. By now it might seem that Stan Longdin was on commission from the venue, but according to the reports, it did seem to be the most suitable venue. In January 1978 an open meeting of prospective members was held at which the decision to go ahead with the association was made and the processes to be adopted were agreed upon. Over the next few months, a plethora of steering committee, sub committee and general committee meetings were held to establish the general rules of the association, which still did not have an agreed name. A firm of solicitors known to Bill Johnston was engaged to draw up the Articles of Association and other legal papers. It is interesting to note at this point, that of the thirty three companies that initially expressed an interest in joining the fledgling association, just five members remain in business today under the same banner.

In March 1978, the steering committee met and the minutes recorded the following main points: the association should be run by a staff of three; a Secretary General who would ideally have a surveying qualification and have held a responsible position within the industry, a full time administrator and a part time assistant. A President would be elected for a maximum of three years by the council of twelve members, elected from the membership. The budget was set at £45000 per annum. Two important benefits of membership were identified by the steering committee as being necessary to attract members. These were to improve the status of the surveyor by barring less reputable operations from membership, and to increase turnover by being able to charge economic rates. I assume that they meant increase profitability as one without the other is pointless!

It would appear that agreement over the scale of membership fees was a difficult hurdle to overcome. A flat fee of £500 was suggested which in terms of 1978 finances seems an inordinately high sum. This was driven by the proposed budget of £45000 and the anticipated membership of one hundred companies. Suffice to say that this was rejected as was the idea of running the association’s own secretariat when financial reality was brought home.

The major hurdle to overcome in the formation of the ALS would appear to have been the acceptance and agreement of a name by the many parties by now involved. It is on record that it took fifteen months of meetings and correspondence before the current name of the UK Land & Hydrographic Survey Association was accepted. Records show that the first set of articles was drawn up using the name of the United Kingdom Survey Association. However the Registrar of Companies did not accept the name, requiring the inclusion of a word within the title explaining what type of surveyor would be involved. The Registrar was however happy to accept either the “United Kingdom Field Survey Association” or “The United Kingdom Geometric Survey Association Limited.” The committees and individuals involved thankfully did not like either of these suggestions so happily spent the next year and a bit in a deluge of correspondence suggesting many different names. Some of the suggestions in today’s world would quite beggar belief. The UK Association of Surveyors and Map Makers, shortened (?) to UKASAMM was one, another was the UK Association Of Survey Data Collectors. One committee member came up with the snappy title of “The UK Topographical Survey Association of Land, Engineering, Photogrammetric, Hydrographic and Cartographic Survey Companies.” That one really trips off the tongue. The letterheads would also be a joy to behold. The one that I am most grateful for not having been adopted was the Federation of British Geometers or FBG for short. Perhaps Roald Dahl got his idea for the Big Friendly Giant from this suggestion? A logo was even designed for this name with the explanation that “the image to be used was derived from the peppered moth caterpillar of the Family Geometridae. This family of caterpillars were so named because of their behaviour – they appear to be measuring whilst in motion.” Perhaps the proposer had something after all?

Whilst this major debate of the choice of names was going on, the logistics of the association seemed to take a bit of a back seat. However, when the current name was agreed upon in 1979, it was full speed ahead with the final rules, aims, finances, newsletters and general requirements of establishment. The first Council was elected and Bill Johnston was duly elected as TSA’s (the abbreviation having already been adopted) first President. The first Secretary General was Mr G Stebbing who duly recorded the minutes of the first official Council meeting on the 8th January 1980. The other Council members on that auspicious day were. J Cooper, M Iffland, P Davies, M Jensen, M Oliver, R Pearce and T Paton. Apologies had been received from T Bancroft, T Bourne, L Scott and T Fenton. The original committees were to govern Legal, Finance and membership/Rules.

So there it was. TSA was up and running, with over thirty members, just six years after the initial informal meetings were held. It had already been agreed that TSA could not function without a professionally run Secretariat and could not afford one of its own. The SSAI, later changed to the SSA, was contacted and agreed to provide this service for an initial fee of almost £10000. Alan Littlejohn became the Secretary General followed by Jim Winstanley, Nick Granger and Tom Dougherty.

In July 2006 TSA took the plunge and fulfilled the dreams of those pioneers back in 1975 and established its own Secretariat with Rachel Tyrrell and myself at the helm. It is also nice to record that the target number of member companies set in 1975 has now been achieved. TSA may at times move like the aforementioned caterpillar, but we do get there eventually.

Here we are now thirty five years on with a vibrant association with in excess of one hundred and fifty members, its own fully manned (well part womanned) and financed Secretariat, industry suppliers as members, a PI scheme, an excellent interactive website, H&S support, regular meetings and widespread regular publicity. One of the original aims of the association, that of political lobbying, has now been addressed and intercourse with ICES, RICS and other bodies continues unabated. I am sure the founders would approve of this transformation.

Sincere thanks should go to all the people that pushed so hard for the formation of TSA in the 70’s. Their efforts and foresight will not be forgotten. Sorry if I sounded a bit like Winston Churchill there; the emotions have got the better of me.