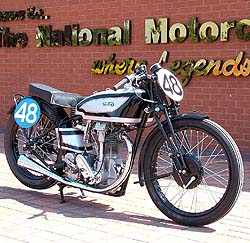 TSA held it’s 36th AGM on 13th April, using the centrally located National Motorcycle Museum as the venue for the day.  Members had access to the Balcony Suite, with the opportunity to sun themselves as we had thoughtfully laid on sunshine too.

As ever, the business of the AGM was conducted swiftly but efficiently.  The Report and Accounts for a very successful 2015 had previously been circulated to members for in-depth study.

Mark Combes, in his capacity as TSA President, chaired the day and his most enjoyable task was to present the annual President’s Prize.  This year the worthy recipient was Graham Mills of Technics Group.  Graham has been, and still is, one of the most active members on Council.  He stood for election to Council back in 2007 and has since chaired both the Technical and PR Committees, plus also registered the longest consecutive stint as TSA President from 2010 to 2015.  Graham also heads up the TSA Accreditation Scheme Committee and has represented TSA at the Survey Liaison Group (SLG) for many years.  He also sits on the ‘Board of Governors’ who oversee the running of The Survey School.  All of this is voluntary work and the amount of time and energy Graham continues to give to TSA work and projects is hugely appreciated. Lockton generously sponsor the Prize and Scott Brown of Lockton made the presentation of the trophy, along with £100 cheque for Graham’s nominated charity, which is Disability Challengers – a charity for disabled children.

As ever, the programme was put together with the aim of providing presentations on topical and useful subjects.  This kicked off with Richard Maltby’s update on the whole subject of training and apprenticeships.  Bill Pryke, CEO of CharteredICES, then followed this up with a talk on professional qualifications for CSCS cards.  Graham Mills and Terry Mundy (from Lloyd’s Register) did a joint presentation on the latest on TSA’s Accreditation Scheme for Utility Mapping Companies.  Scott Brown and Chris Lennon of Lockton then rounded off the morning with a very useful insurance update for members. Members were then able to enjoy great food in the sunshine, making use of the key networking benefits that are always on offer at a TSA event. Steven Woodards and Tom Harling from Airbus Defence & Space then presented a very informative half an hour on Satellite Imagery – where it started and the rapid rate of development that has occurred.

TSA Supplier Members, PCM, then rounded off the day with a very useful talk from Matt Feeny and Chetan Varma on making best use of IT and The Cloud.  They, very bravely, demonstrated live all the benefits of working this way.

The best attended TSA AGM day then finished on time, allowing members to either stay for a delicious cream tea or head for home.  The feedback has been excellent, with comments such as “Packed a lot in to the day so very worthwhile” and “A terrific networking event” backing up the fact that 100% of attendees said they found the day worthwhile.  Don’t miss the next big TSA event – TSA’s Conference on 9th November!