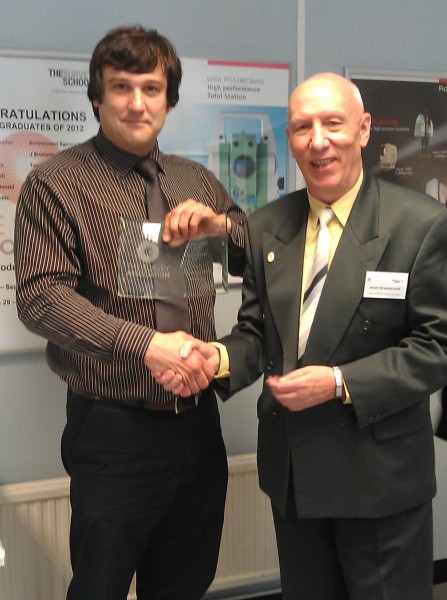 Each year in June, the awards ceremony for the TSA Introduction to Surveying Training Course takes place at the Survey School in Worcester. Since its inception in 2001, the course has seen over 260 students graduate through the two year course.

At the end of the course, in addition to the award of certificates to all those graduating, two major prizes are also up for grabs. One for Best Assignment is awarded by Chartered ICES and this year went to Josh Hackett from Tower Surveys. This was presented by ICES President Jason Smith.

The main prize, that of Best Student, is a joint award from Leica and TSA. This year’s recipient was Geraint Christopher from the Environment Agency in Wales. The prize, a shield, plaque and a cheque were presented by Nigel Bayford (Leica) and Rory Stanbridge (TSA.)

Geraint achieved an average of 85% over the six modules of the course. A remarkable achievement.

The course which was established by TSA as a result of the decreasing number of courses available to surveyors has continued to flourish despite the tough times being experienced by the industry. Long may it continue.